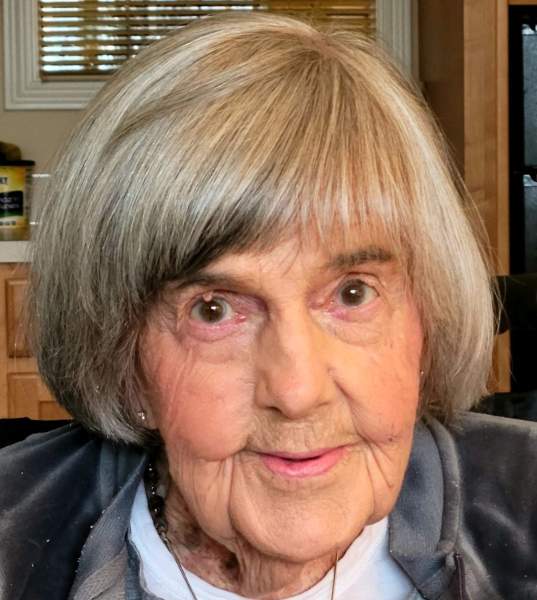 Patricia Anne Powers (Pat) Betts, 96, beloved wife, mother, grandmother, and friend, passed away peacefully with the comfort of family on Sunday, April 17, 2022, at Butterworth Hospital in Grand Rapids, Michigan.  She was born on November 5, 1925, in Rome, New York, to Mary Reding Powers and Dr. Edward Powers, and was one of eight children.

Pat grew up in Rome and graduated from St. Aloysius Academy in 1943.  Immediately following high school, she attended Vassar College, a woman’s university in New York, where she received a Bachelor of Arts degree and her elementary teaching certification.  Immediately after graduating, Pat began teaching at Croton-on-Hudson in New York.  She continued teaching after moving to Greenville, MI with her childhood sweetheart and husband, Joseph Charles Betts.  This was where they lived, worked, and played for most of their shared life.  Pat became a busy homemaker and the matriarch of a family of eight.  Pat’s greatest pleasures were her husband, children, grandchildren, friends, and faith.

Pat married Joe in Rome, New York, in 1948, after his honorable discharge from military service.  Joe preceded Pat in death (April 2013), after which Pat remained in Greenville.  They were both active members of St. Charles Church and enjoyed time at the Greenville Country Club.  Pat was also a member of the Per Gradus Club.

Pat was preceded in death by her parents, her husband, her Powers siblings Richard, Edward, Bernard, Mary, Alice, and Fran, as well as one of her daughters, Susan Marie Betts Ludeman.  Pat is survived by her brother, Paul Powers of New York; her sons Joseph (Jackeline Correia Dantas) Betts Jr. of Colorado; John (Janet Clark) Betts of South Carolina, and grandchildren Zachary, David, Molly and Tyler (Chandra Nguyen) Betts; Paul (Gayla Davis) Betts of Illinois; her daughters Barbara Betts (Jim Swartz) of Michigan and grandsons Jake and Sam Barry; and Anne (Kerry Cupp) Betts of Michigan. Pat is also survived by her daughter Susan’s children, Erin, Sarah, and Ben (Megan Kelly) Ludeman, along with their father, David, and his wife Penny Ludeman.

At Pat’s and the family’s wishes, there will be no visitation.  A private service at Marshall Funeral Home in Greenville will be held at a future date with the burial immediately following at St. Charles Cemetery.

Pat was a lively spirit and appreciated the simple pleasures of eating home cooked food (with the motto “There was nothing a stick of butter or pound of bacon wouldn’t help.”), making trips to Meijer with Joe for ice cream, picking wildflowers, and watching all the activities on the lake.  Much loved, Pat will be missed.  A wonderful woman, a glorious life, and always, a kind word.

Condolences may be left on Patricia Anne Powers Betts’s online guest book at the Marshall Funeral Home in Greenville, www.marshallfuneralhomeinc.com

To order memorial trees or send flowers to the family in memory of Patricia Anne Powers Betts, please visit our flower store.