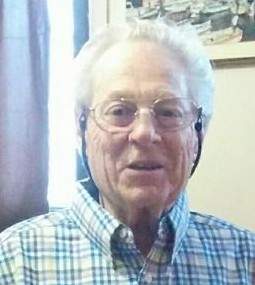 On Tuesday, February 8, 2022, Keith Walter Gall passed away peacefully at the age of 87 from Alzheimer’s Disease. Born in Ypsilanti, on Christmas day 1934, he was a resident of Grand Rapids for most of his life where he was a skilled and talented sign manufacturer, a craft which he learned from his father. He was a graduate of South High School, class of 1954, served in the National Guard and ran a successful business until his retirement. He will be missed greatly by his family and caregivers. He is survived by his daughters, Wendy Gall Smith, Melissa Carter, Lisa Steigmann-Gall; son-in-law Al Carter; sons Keith and Michael Beerens; sister Diane Griffin (Keith Ihrig), nephew Jim Howard, many grandchildren and great-grandchildren. He was preceded in death by his wife, Deanna Gall (nee’ Birk) and his parents John and Mildred Gall.  No services are planned at this time.  Arrangements are by the Marshall Funeral Home, Greenville, with complete obituary online at www.marshallfuneralhomeinc.com where you can leave a message of condolence for the family.

To order memorial trees or send flowers to the family in memory of Keith Walter Gall, please visit our flower store.