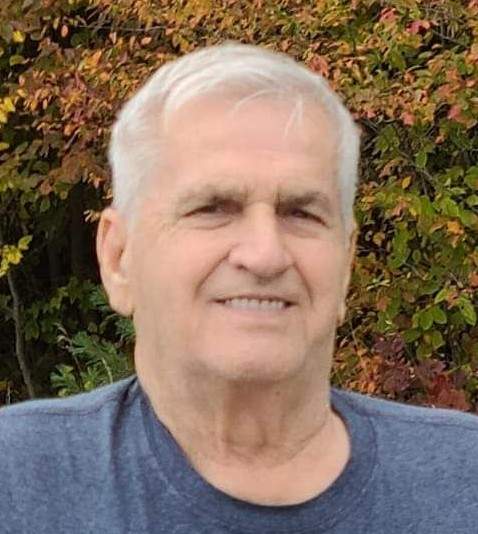 Edmond John Moffett age 81, of Greenville, entered into life on May 5, 1940, in alma, Michigan, the son of Lloyd E. & Rettie (Dexter) Moffett and entered into rest on March 9, 2022.  He was a graduate of Alma High School, served 6 years in the United States National Guard, drove truck for Giant Supermarkets, worked at Fowlers in Ithaca, had a meat market and a few rental houses around Ithaca.  In 1968 he went to work for General Motors Fisher Body Plant in Lansing.  On November 15, 1980 he married Bonnie Hawley and they were married for 41 years.  He and Bonnie shared a hobby farm and together had 300 head of hogs, 30 head of cattle, chickens, ducks, turkeys and peacocks.  That’s not counting the yorkies he and Bonnie raised and sold for about 10 years.  He loved farming and always put in a big garden.  Ed even helped with the canning.  In 1991 due to health issues, Ed retired from GM and sold all of the animals as he could no longer farm.  Together Ed and Bonnie traveled the United States, spent 7 winters in Donna Texas where he met many friends and in 2016 moved to Greenville to be closer to town and hospitals.  In 2020 they bought a small motor home to get out of the house as they both loved the road.  Ed is survived by his wife Bonnie; children Edmond Moffett, Jr. of Ithaca, Brian Moffett of Sumner, Darcy (Alan) Whaley of Alma and Susan (Don) Avery of Crystal; step daughter Billie Jo Burgess of Kalamazoo; grandchildren Zak (Kaileigh) Moffett, Becca Moffett, Libby Moffett, Shara (Dustin) Adams, Shelby (David) Hofmann, Stephanie (Bryn) Lamey, Nichole (Clint) Rademacher, Heather (Gaurav) Chanhan, Mathue Whaley, Wesley Avery, Kenny (Raychelle) Avery and Rhonda (Travis) Shinabarger; step grandchildren Callista Cook and Dakota Burgess; great grandchildren Jaxin, Mahaila, Keygan, Nevaeh, Dominic, Brynnen, Sage, Piper, Gabe, Kynley, Brody, Colton, Grace, Noah, Mariah, Lake, Ryder, Rakenna, Bently,  Kendalynn and Brayston; sister Carol Reeves of Ithaca; brother in law Marion Taylor; sisters in law Sally Moffett of Alma, Judy Ross of Greenville and Cheryl Brecht Crosby, North Dakota; many nieces and nephews.  He was preceded in death by his parents, Lloyd and Rettie, brother Quitman Moffett, infant brother Zane Moffett, sisters Alta Jane Clark, Marilyn Taylor and Roxanna Dunevant, infant granddaughter Megan Moffett, brothers in law Jerry Stearns, Ronnie Stearns, Gary Ross and Raymond Brecht. According to his wishes no funeral service or visitation are planned at this time. Burial will be in Evergreen Cemetery, Sheridan.  Memorial contributions may be made to the Montcalm County animal shelter or the St. Jude Children’s Research Hospital Arrangements are being handled by the Marshall Funeral Home, Greenville, with complete obituary online at www.marshallfuneralhomeinc.com where you can leave a message of condolence for the family.

To order memorial trees or send flowers to the family in memory of Edmond J. Moffett, please visit our flower store.