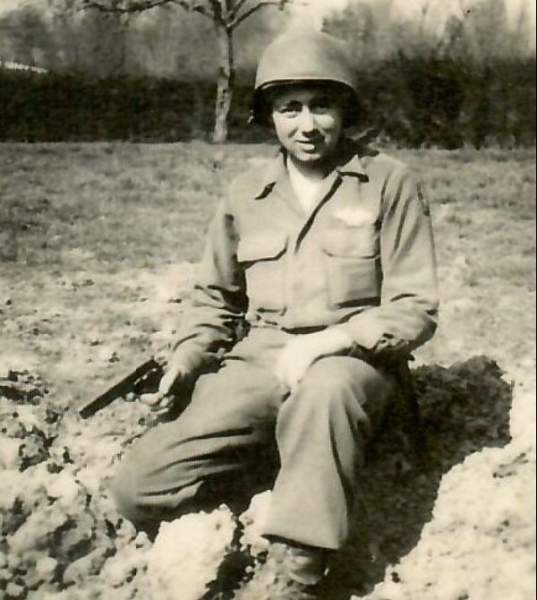 Dorance Lintz 96 of Greenville, passed away at Green Acres on December 28, 2021. Dorance was born March 12,1925 in Hardin County, Ohio the son of Frank and Opal Bailey Lintz. Dorance married Evelyn Bessie Webb on January 17, 1948, in Stanton. He loved to hunt deer and small game and fish, especially in Canada. His family enjoyed playing cards and he could not pass up a cookie. Dorance was a life member of the American Legion Post #101, VFW Post #3794, and the Moose Lodge #1939. Before the service he worked on his father’s farm, and after the war he worked for (Gibson) Frigidaire Refrigeration Company in Greenville, retiring in 1987. He served his country in the Army during WWII. He entered the service on January 15, 1944, and started basic training as an Infantry & Cannon Company Gunner. He then joined the 377th Infantry Regiment of the 96th Infantry Division. Here they were taught training in weapons and learned to fight as a combat team. After they embarked on the USS West Point troop ship and headed for England. Dorance was then placed as a gunner on 57mm anti-tank guns and the 337th crossed the English Channel arriving in France. They took part in several drives through to the Rhine. There were 434 men killed in action, 541 wounded in action and 244 missing in action in all the drives. His anti-tank platoon’s mission was to clear mines left by the enemy, lay anti-tank mines to disable the enemy tanks and destroy or disable enemy tanks with their 57mm guns. He was discharged January 26, 1946, with the rank of corporal gunner and received several awards, such as Good Conduct Medal, World War II Victory Medal, American Medal, American Theater Campaign Medal, EAME with three Bronze Stars, Combat Infantry Man Badge with five and one-half months in combat. Dorance is survived by his stepdaughter Uvonah Gwozdz of Greenville; 14 grandchildren and 34 great grandchildren; sister Connie (Don) Maness. He was proceeded in death by his wife of 60 years; stepchildren, Bettie Garforth, Margaret Bramen Cantall, Bonnie Alexander; son-in-law Larry Lavery, Clifford Shepard and Marion “Steve” Gwozdz; brothers and sisters-in-law Webster (Evelen) Lintz, John (Nitabelle) Lintz, Marshall Lintz and sister-in-law Nellie Brown; Sisters and brother-in-law Edna Denman, Julia (Dale) Hawes, Marzie Basil and Juanita Green. Funeral services will take place Monday at 11AM at the Marshall Funeral Home with visitation 1 hour prior to the service with military services. A luncheon will be at the VFW Post in Sheridan with the Burial to follow. Memorial contributions may be made to the American Legion Post #101. Arrangements are by the Marshall Funeral Home, Greenville, with complete obituary online at www.marshallfuneralhomeinc.com where you can leave a message of condolence for the family.

To order memorial trees or send flowers to the family in memory of Dorance Lintz, please visit our flower store.

Please be considerate of others space.

Please be considerate of others space.